Tackling the dune climb at Sleeping Bear Dunes National Lakeshore feels like mountain climbing. But these mountains made of sand are tricky. With every step up, climbers sink back down again by almost the same distance.

Because of this, it takes a while to climb up the 100-foot bear but it’s worth it for the views of Lake Michigan and the surrounding sand dunes. When it’s time to go

home, another reward is to bounce or roll down the dune to the ground below.

The highest point in the park is 450 feet straight up from Lake Michigan. Anyone attempting to climb that dune might be forced into crawling, but that’s forgotten once the top is reached. From there, it’s easy to see why Sleeping Bear Dunes National Lakeshore was named the “Most Beautiful Place in America” on ABC’s Good Morning America.

According to the National Park Service, the Chippewa Indians once used the bear-shaped dune as a landmark. The bear rose about two thousand years ago and has seen its share of changes. It no longer looks like a bear. In the late 1800s, it was covered with trees and shrubs, giving it a dark shaggy appearance. For now, the bear has gone into hibernation and his sand dune looks more like a cave. With all the wind-swept changes, the bear may rise again or disappear. 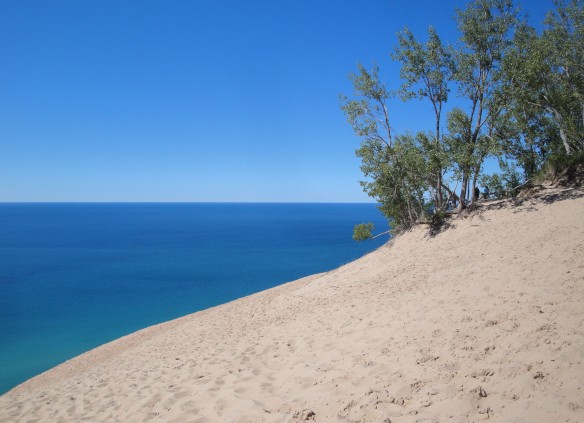 Because these dunes feel so much like mountains, I was surprised to learn that Adelie from Artfully Aspiring had gone sledding there. I’ve been known for a few sledding feats, including barreling right into a raging polluted river, but I don’t think I’d be brave enough to sled down steep mountain dunes like these. Though you never know. If I find myself there again when there’s enough snow, I might be tempted.

Instead of sledding there, as a teenager I climbed up and bounced down the dunes while listening to Pink Floyd’s “The Dark Side of the Moon.”

Do you have a favorite National Park memory?