Strangely enough, Bozo the Clown, the ocean, and my crazy dog all influenced me while writing a short story called “Wandering Universes.” I’m excited to announce that the story was recently published in Halfway Down the Stairs.

For any writers out there, this is a great publication to submit to. Each issue has a theme like “we all fall down,” “time” or “persuasion” and it’s fun coming up with a story or poem to fit each theme. This issue’s theme was “chaos,” which went along well with my crazy dog.

Bozo can also be pretty chaotic. I know this because I once appeared on the show and had to run around and catch as many balloons as possible. When the neighborhood kids saw me on television, they brought presents to the house and asked for my autograph. It was my one brush with fame. A lot of people think clowns are creepy these days, but the thought of Bozo still makes me smile.

The ocean, whether chaotic or calm, is always influencing me. In this short story, a couple continually walks a certain coastline, possibly too often, but doing so lets their minds wander. Until chaos arrives, that is. 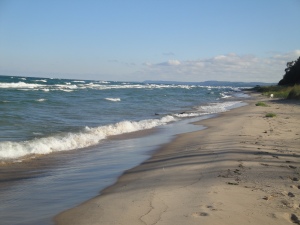 In case you’d like to read it, here’s a link to my short story Wandering Universes.