“With every drop of water you drink, every breath you take, you’re connected to the sea. No matter where on Earth you live.” – Sylvia Earle

The ocean rejuvenates, inspires, and restores us. It gives us so much, but any ocean-related news is too often depressing. One of the reasons I love the nonprofit group Oceana is that it does something about the depressing news. Members receive notifications of petitions to sign and the group works with lawyers and politicians to create real environmental change. So for some good news, here are a few ocean victories that came about this year:

No seismic airgun blasts in the Atlantic: More than 100,000 supporters signed petitions to stop seismic airgun blasts in the Atlantic. In August, the Department of the Interior postponed its decision on the blasts for the third time. This will come up again, but in the meantime it’s been a reprieve for whales and dolphins. Airgun blasts can also kill fish eggs and scare fish away from important habitats. Following seismic surveys, catch rates of cod and haddock declined by 40 to 80 percent. 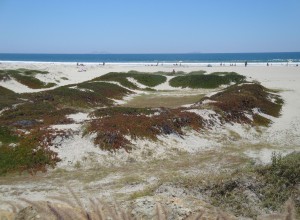 Protecting seafloor habitats: After seven years of campaigning by Oceana, Spain agreed to prohibit trawling over fragile habitats on the seamounts of the Mallorca Channel and the coral reefs east of Cabrera, protecting these important habitats from being crushed and destroyed.

Saving sharks: More than 4,000 New Yorkers petitioned for their state to ban the trade of shark fins. In July, New York became the eighth state to implement a shark fin trade ban. Most of the shark fins imported into the U.S. came in through the eight states that enacted these bans. In the same month, the European Union banned all shark finning by EU vessels. The U.S. government banned shark finning in U.S. waters in 2000, but until this year the trade in shark fins was still legal across the country.